Is this the new norm? 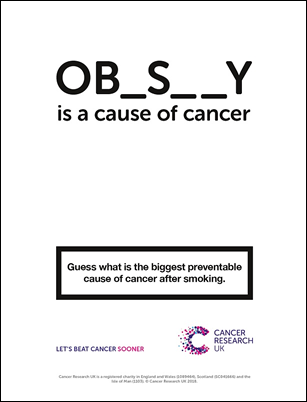 sure you have come across these adverts from Cancer Research while you have been out and about, and everyday I seem to hear more and more stats about how the population is getting bigger and that soon being obese will be the new norm. It is clearly a problem and a growing problem caused by an energy imbalance: taking in more energy through food than we use through activity.
We all know: eat too much + move too little = too much weight and being overweight is bad for you.

But what has jumped out at me recently is that, according to government research, today nearly a third of children aged 2 to 15 are overweight or obese and younger generations are becoming obese at earlier ages and staying obese for longer. A third!

What shocks me even more, is when you break this down to the very youngest children, 9% of four and five-year-olds are now classed as obese and in Solihull itself, where we are based and run some of our sessions, 20% of children in reception at school are overweight or obese.

How can this be? I have 2 young boys and they never sit down – not even for 5 minutes!! Children love to run around and be active, I’m exhausted after a day with them but the facts don’t lie.

The really worrying thing is that once a habit is formed in such a young age it will be hard to break and there is overwhelming evidence that a child’s experiences during their early years lays down a foundation for the rest of their life. So by children starting off in life overweight, they will be more likely to stay overweight, especially if so many people around them are the same.

So what can be done? Better diet and move more. Of course it’s not always easy and I’m not an expert in nutrition but I do know plenty of ways to get kids moving more, right from the very youngest, which I’ll share next week and the best thing about obesity in children – it can be changed.

After a weekend with my children, I think I need a lie down!